The future of the N8 Policing Research Partnership (PRP) will rely on its ability to evolve with increasing demands being placed on the UK’s police forces, according to director Professor Adam Crawford. 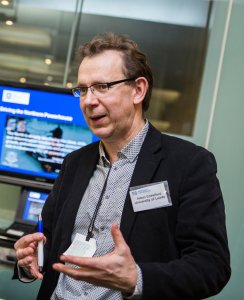 In an exclusive interview with Policing Insight, the N8 PRP director has said that the partnership must “think about the demands on police and the future of policing as a public service moving forward…we can go on to achieve more by untapping the knowledge and skills within our police forces.”

Professor Crawford also reflected on the N8 PRP’s achievements as it marks its fifth anniversary and outlined the challenges that lie ahead for sustaining collaborative police and academic research partnerships.

He said: “For the longer term, we need to maintain sustainable support for the partnerships’ infrastructure which is very often taken for granted. If you can’t support the infrastructure then all of the other parts just fall away.

“We also need to enhance our collective future ambitions for the partnership because we have established a way of working which is productive and is working well, but to take it to the next level and to become a real hub for policing research and knowledge exchange nationally and internationally, we need to develop further and build a reputation for cutting edge research in particular fields.”

Professor Crawford revealed that there were a number of obstacles to overcome in the first few years of the partnership. He said: “During the early stages of our development there was a lot of uncertainty around the role of Police and Crime Commissioners as we began in 2013 and PCCs had just been elected.

“Since that time, I am pleased to say that we have mature professional relations with most partner PCCs and some of those that were at first sceptical, now see the value of a collaborative partnership and some have become real champions of the research and work that we do.”

Reflecting on the partnership’s biggest success stories over the last five years, he said: “A key achievement has been establishing and securing the relations that sustain the partnership. While the existing N8 partnership of the eight research-intensive universities in the North provided a platform and structure to plug into, we had to build the infrastructure.

“It has been particularly gratifying for me that we have been able to support front line practitioners and early career researchers. The small grant projects have opened up research opportunities and supported career development across the professions.”

Fifteen projects have received funding to date, each receiving up to £25,000.

Professor Crawford said: “So what you get, for a small financial resource is a large commitment from the contributing institutions complemented by a large dose of enthusiasm, commitment and curiosity on behalf of the team members – both the researchers and practitioners. The result of such collaborations are quite striking.

“It shows that the N8 PRP has national strategic importance, and although the partnership is using the North as a lab, our work has national implications.”

The original article can be viewed on the Policing Insight website.