The director of the N8 Research Partnership has called for urgent investment in innovation in the North of England to transform UK competitiveness and address funding inequalities. 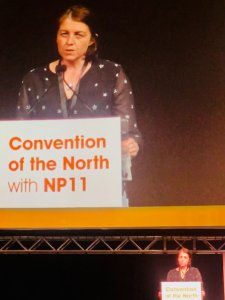 Dr Annette Bramley made her pitch during a ‘Dragon’s Den’ style session at a major conference hosted by Convention of the North which brought together political, business, community and academic leaders from across the region.

In her pitch, “Increasing Innovation Capacity in the Northern Powerhouse”, Dr Bramley argued for greater targeted investment in the North in the next Government spending review. She  also said that it was vital that education at all levels must benefit from more funding to equip the region and future generations with the skills to make the most of the 4th Industrial revolution or be left behind.

She said: “The North of England has fabulous universities, businesses and people but is being held back by market failures and structural issues which need a transformative government investment to address.  We want to see the Northern Powerhouse become an attractive place to start and grow new businesses based on access to new ideas and knowledge, a skilled workforce and superb quality of life.

“In the North we are less productive than other regions with more innovation funding.  We have fewer businesses per head than London, the South East and the East of England and those businesses are geographically more dispersed yet the investment in transport infrastructure is much lower than in the South. Importantly when compared with the Golden Triangle of London, Cambridge and Oxford we have fewer micro businesses and SMEs, much, much less access to investment capital and, half as much UK Research and Innovation funding.

“Greater investment in research and innovation is vital for the health and wealth of the UK as well as here in the Northern Powerhouse. We need to create clean and productive businesses which support healthy and resilient communities and which in turn will reduce inequalities between and with regions.”

The event at Magna Science Adventure Centre in Rotherham was co-hosted by the NP11 group of all 11 Northern Local Enterprise Partnership chairs to whom Dr Bramley pitched in the main auditorium attended by up to 1,000 people.

Both Boris Johnson, the Prime Minister and Jake Berry MP, Minister for the Northern Powerhouse also addressed the conference. In his speech, the Prime Minister suggested more control over rail services could be devolved to the North, although details of timings and funding are yet to be confirmed.

A recent analysis by IPPR North highlights the long-standing disparity between transport spending on London and on the north, showing that transport spending in the capital has been on average 2.4 times higher per person; and that spending per person has increased by 2.5 times more in London than in the north. The report argues that if the north had received as much transport spending as London has over the last decade, there would have been an extra £66bn spent in the region.

Roger Marsh, the NP11 chair Roger Marsh also called on the Prime Minister to place the north at the front of its thinking for UK competitiveness and prosperity beyond Brexit. He told the Conference: “Despite the clear economic opportunity the north represents, the North-South divide continues to widen, holding back our economy, our productivity and people’s opportunities. We need bold ideas from the north and radical change from government that leads to a seismic shift in funding and powers if we are to truly ‘level up’ the North.”