Experts from the N8 Research Partnership have pioneered a new international study, analysing the impact of African rainforests in slowing down climate change.

The scientists at the University of Leeds’ School of Geography, were studying the impact of record heat and drought on intact African tropical rainforests and were surprised by how resilient they were to the extreme conditions during the last major El Niño event.

The research, as reported in Proceedings of the National Academy of Sciences today, found that intact rainforests across tropical Africa continued to remove carbon from the atmosphere before and during the 2015-2016 El Niño, despite the extreme heat and drought.

Tracking trees in 100 different tropical rainforests across six African countries, the researchers found that intact forests across the continent still removed 1.1 billion tonnes of carbon dioxide per year from the atmosphere during the El Niño monitoring period. This rate is equivalent to three times the carbon dioxide emissions of the UK in 2019.

During 2015-2016 African rainforests experienced warming of 0.92 degrees Celsius above the 1980-2010 average, and the strongest drought on record, both driven by the El Niño conditions on top of ongoing climate change. This event gave the scientists a unique opportunity to investigate how Africa’s vast tropical rainforests could react to heat and drought.

Lead author Dr Amy Bennett, in Leeds’ School of Geography, said: “We saw no sharp slowdown of tree growth, nor a big rise in tree deaths, as a result of the extreme climatic conditions. Overall, the uptake of carbon dioxide by these intact rainforests reduced by 36%, but they continued to function as a carbon sink, slowing the rate of climate change.”

Tree measurements in long-term inventory plots in intact forest — unaffected by logging or fire — were completed just before the 2015-2016 El Niño struck. Emergency re-measurements of 46,000 trees across 100 of the plots in the Democratic Republic of the Congo, Gabon, Cameroon, Ghana, Liberia and the Republic of the Congo then allowed the researchers the first ever opportunity to directly investigate how African tropical forests would react to the hotter, drier conditions.

Senior author Professor Simon Lewis, in Leeds’ School of Geography, who led the development of the Africa-wide network of forest observations, said: “Scrambling field-teams to get to our remote rainforest sites was worth all the difficulties we faced. This is the first on-the-ground evidence of what happens when you heat and drought an intact African rainforest. What we found surprised me.

“African rainforests appear more resistant to some additional warming and drought compared to rainforests in Amazonia and Borneo.” 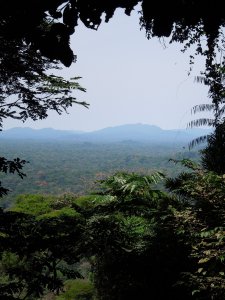 African rainforests exist in relatively dry conditions compared to those across much of Amazonia and Southeast Asia.

The researchers wanted to establish whether this made them particularly vulnerable to extreme climatic conditions, or if the abundance of drought-adapted tree species occurring in African forests meant that they were less vulnerable to additional warmth and drought.

The results showed that the biggest trees in the forest were largely unaffected, whereas the smaller trees grew less and died more during El Niño, potentially due to having less access to water than the larger trees.

Yet these negative effects had only modest impacts. African rainforests continued to function as a carbon sink, as the changes in the smaller trees were too small to stop the long-term increase in overall tree biomass seen in these forests over the last three decades.

Professor Lewis said: “These findings show the value of careful long-term monitoring of tropical forests. The baseline data running back to the 1980s allowed us to evaluate how well these rainforests coped with record heat and drought.”

Past evidence from similar inventory networks in Amazonia studying major droughts in 2005 and 2010, and in Asia studying the large 1997-1998 El Niño event, show either substantially slower tree growth or much greater tree mortality in response to extreme drought and heat. In all these cases, the conditions led to a temporary halting or reversal of the tropical forest carbon sink in these regions.

Co-author Professor Bonaventure Sonké, from University of Yaoundé I in Cameroon said, “Our results highlight just how important it is to protect African rainforests – they are providing valuable services to us all. The resistance of intact African tropical forests to a bit more heat and drought than they have experienced in the past is welcome news. But we still need to cut carbon dioxide emissions fast, as our forests will probably only resist limited further rises in air temperature.”

Dr Bennett added: “African tropical forests play an important role in the global carbon cycle, absorbing 1.7 billion tonnes of carbon dioxide from the atmosphere each year in the 2000s. To discover that they will be able to tolerate the predicted conditions of the near future is an unusual source of optimism in climate change science.

“Our results provide a further incentive to keep global temperature increases to 1.5 degrees Celsius, as outlined in the Paris Agreement, as these forests look to be able to withstand limited increases in temperature and drought.”